PLUS SIZE OPINION: THE BEST ADVICE I CAN GIVE ABOUT CURVY DATING 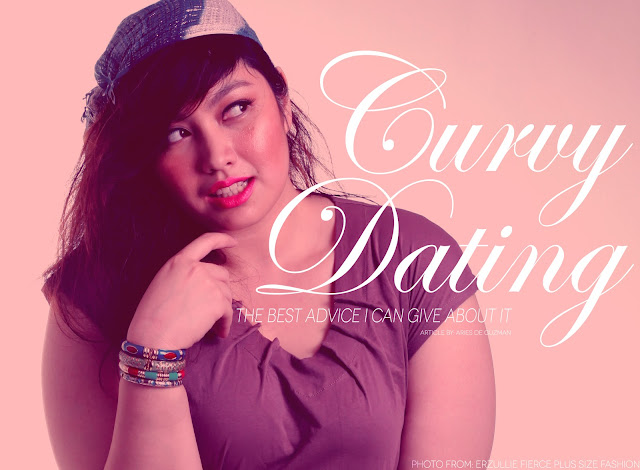 Recently, I have been playing cupid/hitch to some of my friends. It started with a great man wanting to meet a great woman. Good thing that I know a lot of great women in various forms. I actually posted it in my facebook status (I am not as active as I would like to be), "Any great girl friend of mine willing to have a date with a great man friend of mine? Comment or PM me" The response was various. I have received a lot of pm's and the comments were just hilarious or curious. It was a fun thing that happened on my facebook page in a while.

In addition to that, I have stumbled upon this book in pinterest by Kat Bacon --- Get More Dates Than Your Skinny Friends. I haven't bought it but the gist given was basically it was all about confidence. I think it is an interesting book to read. I am a fan of real love stories of almost any form so I love reading dating books.

Anyway, to be honest, I would like to chime in on the matter as well. I must admit, as a curvy woman, and I do not mean to brag, but my love life is pretty healthy. Of course, I had my share of frogs but I have realized that I am the problem on that one. But learn and move on right? That is the key.

And if there is one thing that I have learned with regards to dating as a curvy woman is that we are just in the same dating game as the regular size women. There is a lot of notion that skinny girls get picked first and curvy girls second. Then there is the opposite thought that men love "meat", dog "bones" thing. But, personally for me, what we are really missing out is the truth that we are just like any other woman in the dating game. Why? Because just like women, men also has varying preferences and it's not just about size. Just like the females, men are also looking at (and not only for) the whole package. As such, there is no special treatment for any division, but there are some common pointers.

Again, these are just from my experience, results from each advice vary. Be normal and use your Divine given intellect, okay?

1. YOU ARE WHO YOU PROJECT

You want to have a date? Get a look that says it without looking desperate at the same time. So no to clothing allergy looks. No to shirts that says "I'm Available To Date" or thongs/t-backs that shows when you sit down. You are not projecting that you want to have a date. You are now officially projecting that you are now available for... a one time date in bed with a man who is not looking for a date.

Want to attract a fun date? Look fun. Be fun. Have a smile.

Think about it. Let's say you own a clothing business. Of course, to drive in customers that will want clothes, your store (both internal and external) need to project that you are a fashion line. From the name down to the internal system of the store, everything needs to scream fashion.

Do you think car posters and car displays around your store would drive in clothing customers? How about food posters and cupcakes on your windows? No. If you want to attract clothing buying customers, they have to see that you are selling clothes. Otherwise, that is just confusing.

But I want him to accept me as me. Yes and that is everyone's aim (even the males'). The thing is, we fail to realize that there are many sides of us waiting to be tried on. It's not being schizo or anything. It's about exploring that side and embracing ourselves as a whole.

The thing is... YOU ARE NOT A ONE TRACK WOMAN --- you are the whole PLAYLIST. So do not be afraid to change tunes every now and then. You will be surprised of the adventures that you end up with.

Okay, let's put it down to your side. Let's say you love a sensitive, romantic, preppy guy. Which guy would you get attracted to?

MAN 1: A high fashion guy that wears 5 trends at a time. He is known to go through women like the trends he is wearing. He is also known to be a social climber.

MAN 2: A collegiate looking guy in preppy attire. He is known for long relationships and grand gestures. He looks family oriented as well.

Which do you think you would be attracted to, given your "preferences"?

2. MEN ARE NOT SO DIFFERENT WITH WOMEN --- THEY ALSO HATE WOMEN WHO CONSTANTLY FISH FOR COMPLIMENTS

Don't you get irritated when one of your female friends sticks with her d-bag or a-hole boyfriend for years and she constantly complains about it but ends up not breaking up with him anyway? Doesn't it get your blood boiling when there are these women that posts on their facebook "I look ugly today." and then they look glorious? (Obviously, these women are fishing for compliments.) Finally, don't you think men think and feel the same?

There is a lot of notions that men are so different from women, but we forget the fact that there is one uniting factor --- we are both human. Chances are there are some men having women experiences and vice versa. One of which is the irritation about women who constantly needs reassurance about their looks and their worth.

So be the opposite of that girl. You are worth it. Know it and like rule #1 if you project this, there will be a man that will get attracted to that because he knows it too and for you to allow him to get to know more of that worth, will be the greatest challenge he'll ever want to take.

3. DATING IS PERSONAL BUT NOT REALLY

I do have a lot of female friends that get disappointed out there. They want to date a guy but the guy is not interested with them. It's not personal. There is nothing wrong with you nor are there anything wrong with them.

The dating game, ultimately, for me, is about finding the actual right partner that compliments who you are and vice versa. It is more than just looks. It is also about personalities merging and complimenting each other. You can be two beautiful creatures but if your values clash like a tornado and a tidal wave, you may want to re-think this situation before going on further. We want this 'dating' to end up healthy (if it does) or develop better for both.

So don't take it personally. If a guy or a date doesn't work out, THANK GOODNESS IT DID NOT WORK OUT. Because if it did not work out now, most probably, it will be a long a** haul before you can make it work for you and there is not even a guarantee of that. But think about it, would you want it that a guy just stayed with you because he wanted to mold you into his liking? D-baggery is it not?

So relax and kick back a little. Dating is about getting to know the person. If it did not click, don't make it click. Open yourself up to the next experience.