PLUS SIZE DATING: A NOTE ON THE WRONG GUYS 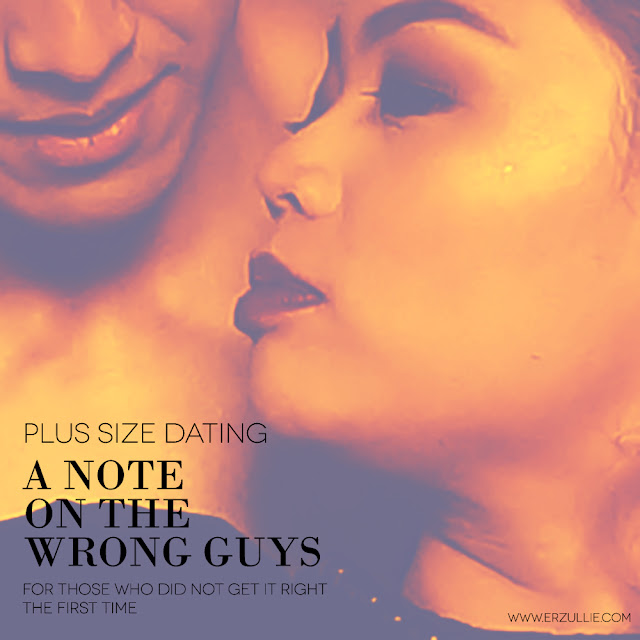 The “wrong guys” I remembered this topic popping up when I was talking with a close friend of mine. I think it went something like this. Some of her friends were telling her that her standards are too high and no man will be able to reach it. With that she said, “while waiting for the right guys, enjoy meeting the wrong guys.”

I remembered she told me her friends looked at her like she was taking crazy pills. But me? I was thinking how brave my friend was for putting her heart on the line. I mean, isn’t it tiring? Doesn’t it hurt so much to waste it on the wrong guys? And knowing me. Damn. I love hard and when my heart gets broken --- it’s shattered.

But this friend of mine. She handles hurt with so much class and looks at every experience as a way to gain wisdom before the right guy comes along, that I was left to thinking --- maybe the wrong guys are sent for a reason.

And with each heartbreak, to be honest, I kept on thinking “my next love will be better”. And although I am not sure how to measure my progress (each love will always be different), I do know one thing --- I learn from my past mistakes.

From the guys that lied to me constantly, I have learned that men are simple --- actions are louder than words.

From the guys that had hidden motives and agendas, I have learned their modus. They paint the most amazing picture at first, treat you like a queen and make you feel special, but once they realize you are the real deal, they run faster than a scared chicken. So, I stay away from men who are like that.

From the guys that were inconsistent, I have learned that they will always remain that way. So if they were already like that from the start, there is really no point of hoping.

I can actually go on and on with this, but in the end, I have realized that the wrong guys? They were sent so that we learn what’s the right guy for us should be like.
In my case, the right guy is the one that does more than what he says, the one who is not scared of who I am and what I can do for love and of course, the one who has already made up their mind when they saw me.

So note on the wrong guys: they point you to the right ones.