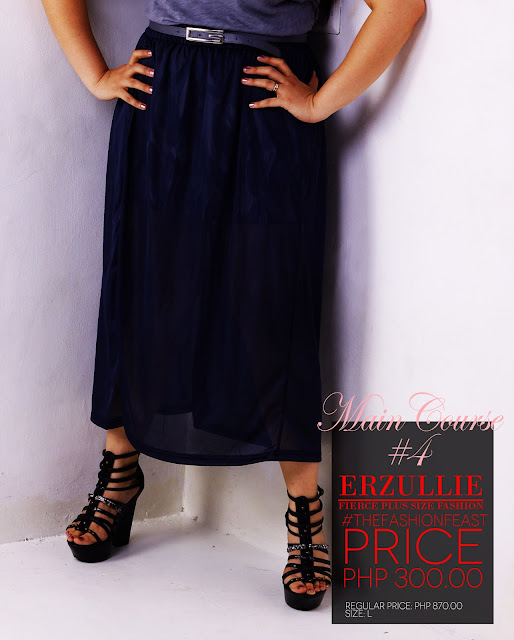 We would like to thank all of the Erzulliestas that already registered for the event! We are still open for registration up until September 16, 2013, Monday. So make sure that you sign up, Erzulliestas!
Few more weeks before Erzullie's THE FASHION FEAST (#THEFASHIONFEAST) on September 21, 2013 (6-9pm) at DOME, Eastwood City, Quezon city! We are very excited! Here is the next item on the Style Menu! Main Course #4 SEE THROUGH LONG SKIRT WITH PRINTED GRAY LINING!This skirt is a big hit in our Resort 2012 collection and the last of its kind. Regular price is Php 870.00 but for the said event, it is only going to be Php 300.00!What a save right? So register today and celebrate with us! (This event is a pre-celebration of our 3rd Anniversary as a brand this November.)FOR MORE INFORMATION: CLICK HERE (http://ow.ly/nWroJ) Cheers!Aries
*NOTE(S):DEADLINE OF ONLINE REGISTRATION IS SEPTEMBER 16, 2013, MONDAY1. Online Individual Registration: Php 300.00/Erzulliesta (includes: reservation of ONE (1) item from THE FASHION FEAST MENU)2. Online Group Registration --- three (3) or more: Php 300.00/Erzulliesta (includes: reservation of ONE (1) item each person from THE FASHION FEAST MENU and ACCESS to Erzullie's Free Closet. See terms and conditions for more details.)3. On Site Registration Individual/Group (On the day of the event, September 21, 2013 Saturday): Php 350.00/ErzulliestaHOW TO REGISTER:1.    See Erzullie’s THE FASHION FEAST MENU (CLICK HERE) and pick your TOP 3 items with sizes for each. (Sizes available are already stated in the lower end of the each photo. Example: Appetizer #1 L, Main Course #2 1L, Main Course #3 2L) If you are registering as a group, do the same for each person.2.    Send VIA EMAIL (erzullie@yahoo.com) your FULL NAME(s), MOBILE NUMBER(s) and TOP 3 items WITH SUBJECT: "THE FASHION FEAST". Wait for a confirmation email from (erzullie@yahoo.com) and deposit the total registration fee on or before the stated deadline (Banco De Oro/BDO transaction only). REMEMBER to email the deposit slip to erzullie@yahoo.com for further transaction security.3.    Erzullie will send the final invite with all of the details and the Erzulliesta(s) just need(s) to appear on the said date to shop and socialize!
FOR MORE INFORMATION: CLICK HERE (http://ow.ly/nWroJ)
Posted by Erzullie 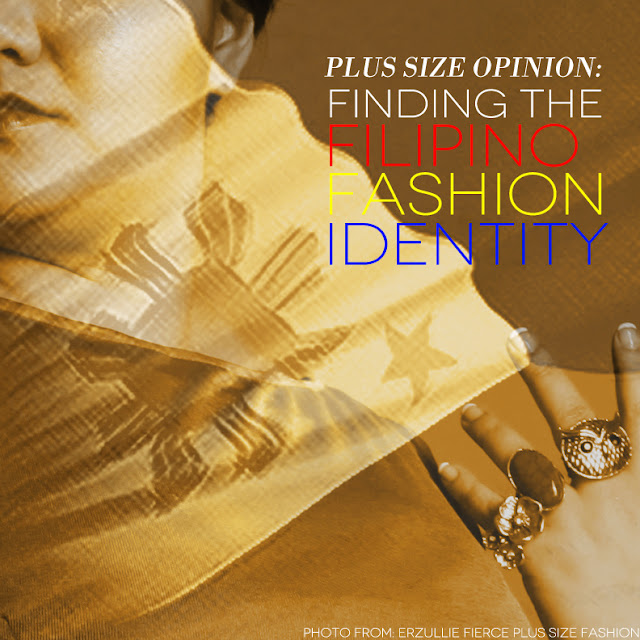 There is this on going notion that Filipinos do not have their own style identity. In fact, there were comments that Filipinos are not high fashion or fashion forward (never will be to some extremists), while there are those that oppose it. And while majority are stuck to the thought that Filipino fashion is only about abaca and other tribal prints authentic to only us, I think I can say that as I have been exposed to the local fashion scene, I think I can finally propose a thought of what true Filipina style is.

We like to look or feel luxurious in everything that we wear.

Whatever style we want to carry, whatever clothing we want to put on, the major point of putting it on is that we want to feel luxurious. Not glamorous that people will be left to wonder in amazement. Not really fashion eccentric to the point that people are left to the bewilderment if that is really possible. It is not even about being chic per se. We are just talking about 'looking or feeling luxurious', whether or not we wear fake or actual jewelry.

Before I get burned to ashes for this comment, let me be clear about this. Wanting to look or feel luxurious does not make us shallow. Thinking that it is the only thing that is important in your whole life will make that thought shallow. And when we say that we want to feel luxurious, it does not necessarily equate to expensive. Although we have the tendency to do so (who doesn't?), I personally believe that Filipinos have evolved from that has finally settled with the true meaning of luxury which is basically anything that makes them feel expensive.

The true Filipina style of wanting to look luxurious is basically about us uplifting ourselves with the feel of luxury. Softening our hearts with it, if you will. If this brings us happiness and it does not harm anyone, then why think it is bad right? In fact, I take pride in it. I think that this is a great sign that Filipinos know self-love and how to treat themselves 'richly' and they express it through fashion.

For me, Filipinos know what their definition of luxury is. It is more on the elegant feel of the style or at least the belief of having it, rather than the actual price tag (at least as I observe it now). That is why we know the clothes from the tiangges and online shops down to the high end brands. We even boast --- not sure if this is okay though --- of having the best knockoffs of these brands and I think it is safe to say that we are all okay about having or buying one. But then with the surge of upgraded fashion knowledge thanks to the internet and re-emergence of true fashion journalism here in our country, we are slowly seeing the importance of honoring the real thing. We boast when we have original items and at the same time take pride in being able to buy almost the same thing from the cheapest place in our country.

But of course, again, I am speaking from my own perspective and in a more general sense. I am also an optimist, so you can say that I am biased (but this is an opinion column so, OF COURSE, I will be. Hehe.)

I basically observed this from the bazaars that Erzullie was able to participate in and I also live both in the city and province alternately. As I have watched bloggers strut their stuff, customers go around and look for both bargains and high end stuff and people in both low end and high end malls, it just occurred to me that we like to mix the branded with not so branded and I was thinking, isn't this a Parisian thing? But then what separated us from the Parisian culture of fashion is that --- we do care with what we think we are portraying. Ultimately it is about looking expensive or luxurious, unlike the Parisian which is basically about looking undone and yet so chic --- like it was effortless all the time.

For us, whatever our financial status is, we like to look self-indulgent in doing so. The little things that we feel luxurious in is what drives our general style. So even if it came from the cheapest place on earth, we make it look (or at least we give that vibe) that is the most expensive thing on the planet. If it came from the most expensive stores that really punches our finances, we will make that vibe that it was priced double that when we put it on. If it looks and feel self-indulgent, we will wear it and take pride that we know how to elegantly indulge ourselves with fashion.

But unlike our neighbor, Japan, wherein their fashion culture has a definite identity, ours is more malleable and have a lot of interpretations, but again the general theme of wanting to look or feel luxurious is strong. We have different versions of being emo, punk, goth, glam, trendy, minimalist etc. but all of it is about giving off that vibe of feeling luxurious. We do it looking generally elegant and we are not apologetic about it. It is not mainly about faking our financial identity, although the immediate notion would be so. But as an optimist, I think that this is a sign that we just know luxury and love to have it. Whatever floats our boat we'll take it as long as it gives us a sensuous pleasure. I think that this is an edge for us, Filipinos of having such a diverse interpretation of it through different styles. It is not that we do not have a specific fashion identity but it is because our fashion identity is more in the practice on the belief of being and feeling luxurious, rather than the actual look.

And so, I hope that this little piece gives us a new perspective about our true Filipino Fashion identity. We may not have a solid look just like the major fashion capitals of the world, but we do know how to look like we have made a great expense in doing so. And why should we feel ashamed about it? We just have a strong sense of luxury and knows how it makes us feel oh-so-pleasurable and if this lifts our spirits up, then it is definitely a good thing.