PLUS SIZE POWER: HOW TO BEFRIEND YOUR FEAR 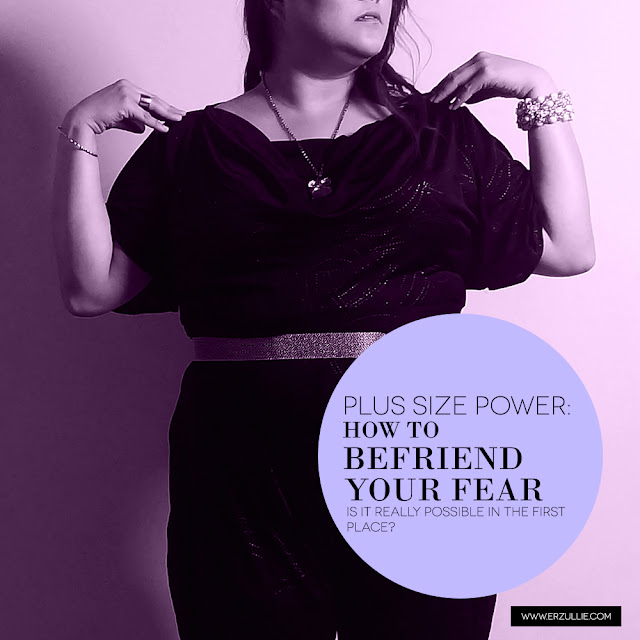 A friend of mine and I have been talking. She has been single for years and by choice. She has many suitors up to now, but she keeps on saying no. I asked her why and she told me it's because she is afraid to be one of those girls who gives everything to their guy to the point that she has nothing left.

Now, to be fair, this friend of mine had front row seats to that kind of situation. I don't want to go into the details as it was private, but let's just say that they were all highly successful women, who have been alone for so long, that finally when they met a guy, they gave up their whole life and identity just to keep that guy and then when the guy is gone they are left with --- nothing.

That's when she developed the fear. Fear of being "that girl".

And having fears can be good. It actually keeps us alive. Because of fear, we don't do things that can actually harm us. But when we allow fear to fully control the direction of our lives to the point that you no longer feel protected but constricted, then you know that you just have to question it.

And I think, at that point, that is what my friend was having "enough of". Unfortunately, she just can't shake it. Fear has a hold on her and it's just plain self-sabotage now.

Then it occurred to me. Fear is actually a "friend". Yes. You heard me right.

I told her, if you think about it, because of that fear, she has screened men fully and made sure that they respected her boundaries and strengthened her sense of individuality. Because of that, you have gained a reputation that you are a woman looking for a serious relationship and thus only men who are into that can only approach you.

Fear, in this sense, has become that constant "post-it" in the brain to remind her of her values. And at that point, fear was reminding my friend that she values herself and that a relationship will be healthier if both people in the relationship still have a sense of their own individual identities.

Without that fear, she could have just said yes to anyone that would come by and indeed have given them everything she got, leaving her with nothing. In this sense, fear has saved her. Fear was a friend that was given a semi-bad reputation.

It's kind of like that "concerned friend" who disagrees to what you want right now. You just know that they are concerned and they may or may not have valid points. But you know that at the end of the day, this is still your life. You still have a choice and you just have to have that faith in yourself that you can pick yourself up whatever happens.

And the way to befriend that fear is to learn the real truth of what that fear is communicating and turn it into a positive reminder.